Posted by Vince in Not Recommended | 0 comments 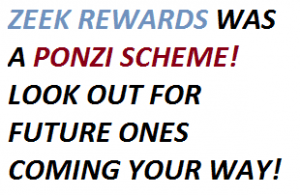 The infamous Zeek Rewards scam claimed a lot of victims. I was telling people to be careful too. I remember. Look, when something blows up that fast, there is always a reason. There were red flags and at that time, many people were writing positive Zeek Rewards reviews in hopes of getting people signed up to them under their affiliate link. What a shame I tell you! Now I can see why many people are hesitant to join any kind of business opportunity. Let me break down the problem with a company or income opportunity like this one, and why I saw it coming a long time before. My hopes is that you will understand the signs of a scam and therefore protect yourself, money, and time.

Most Affiliates Didn’t Even Know How Zeek Rewards Really Worked!

To be honest with you, most of the members in the Zeek Rewards scam never truly knew how the compensation plan actually worked. They just knew when they purchased securities and signed up others to do the same thing, they made money. This is a problem I’m seeing a lot with another newer company called Empower Network, which I’ll get into later. There were to parts to the business model: Zeekler (a penny auction website) and then of course Zeek Rewards (the affiliate/marketing opportunity). As an affiliate, you would buy into the membership and also sell bid packages to people interested in placing bids at the penny auction.

The only thing was, most members never really paid attention to the retail part as much as the commissions you would get by turning average people into affiliates as well. In other words, more affiliate were interested in just recruiting people into the affiliate memberships in which you would keep residuals (Gold, Silver, and Platinum monthly subscriptions).

So one of the “perks” or selling points was how the company would tally up its daily revenue and split the profits with top members. This right here is what raised my eyebrows. Basically, depending if you were a paid-member, Zeek Rewards would share a small percentage with you at the end of the day in a cash bonus if you met all the requirements. The problem is, the people at the “top” kept most of the revenue. They kept everyone happy and distracted with the whole Profit Pool bonus, mean while, commissions were rolling up to the top.

So on August 17, 2012, the Security & Exchange Commission declared the company as operating an actual “Ponzi Scheme”. Boom. Busted. This was absolutely devastating to some individuals who were making good money with the program. [note color=”#fffdf5″]I was chatting with a business partner, and he told me of this one guy who had just purchased a house because of the income he was making with Zeek Rewards. Then just 1 month later, the company got shut down as being deemed a Ponzi Scheme. That is incredibly sad!!![/note] And to be honest, there were a lot of stories similar to this one. Some people only had 1 income stream and that was Zeek Rewards. Oh man. Big mistake. Everything gone.

This is my take on Internet businesses that are growing really rapidly and you’re seeing almost unnatural growth: be very careful. Anytime something sounds too good to be true or it’s just seeing results so quickly and there’s a lot of hype around it, be very careful. Making money on the Internet is definitely simple. But it’s not simple enough for you to buy into something, and have the system make sales for you very easily. There has to be something a little too deceptive to be selling that well and quick. Plus, Mama always told me, “If it sounds too good to be true, it probably is.” Bye bye Zeek Rewards scam!