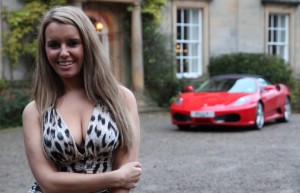 Megan from Get Quick Commissions. Got your attention?

Internet product marketing guru, Chris Freville, brings Get Quick Commissions to the market. Freville has employed the help of his bikini clad friend, Megan M. to help him promote the benefits of this software, which is supposed to make affiliate linking and promoting much easier for everyone looking to make money. Hey, I ain’t complaining. But upon first looking into the software, anyone would be hesitant and rightfully so. Megan is videoed talking to the intended audience wearing only a bikini while sitting in a hot tub as though promoting her new, successfully rich lifestyle. At first glance, most people would run in the other direction.

What is Get Quick Commissions About?

A deeper inspection of Get Quick Commissions reveals great ideas promoted by Freville such as the ability to mass promote on Pinterest thanks to automation. Unfortunately, this is also known as mass spamming, which most people find highly annoying and distasteful, which can turn potential audiences away. The mass commenting is supposed to make affiliate linking simple. On the upside, there is plenty of training videos and material, which makes the software seem well worth the price. However, these materials only teach some of the most basic backlinking and Pinterest commenting techniques that are simple enough to figure out without purchasing the software.

Before purchasing Get Quick Commissions, it is best to understand Pinterest, since the software targets that site specifically as a source for possible leads. Pinterest is a rather large cold lead, meaning a group of uninterested people. Individuals use Pinterest where they can link up with like-minded people to share similar interests, not actually buy any products. People share ideas, recipes, and do-it-yourself projects among one another. They may also share products that they like to see if they can replicate them but buying is not something common for many Pinterest users, which makes Pinterest marketing a moot point.

Is It Anything New, Though?

Get Quick Commissions is not the first software to boast the same features. There are several other gurus who have released their product marketing programs and software as well. All of those programs and software have something in common with this one. They do not work as well as advertised. There are definitely much better things to do with time and money rather than wasting it on some kind of mass-submission software program. The best way to know whether this program is worth the time is to take a step back and think, “Is this too good to be true?” If the answer is yes, turn the other way.

So Does Get Quick Commissions Actually Work?

Of course, experiences with Get Quick Commissions may vary. Perhaps there is a lucky soul out there who might get lucky and make a bunch of money using Freville’s program. Unfortunately, the general consensus of people that have used the program have to disagree. In other words, take their advice, save your money, and look into your own form of advertising through social media sites. Keep in mind that advertising does cost money but it is better than wasting money on programs and gimmick software that is going to do nothing more than cause you an unnecessary headache.