Posted by Vince in Not Recommended | 36 comments 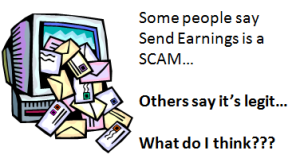 Welcome to my Send Earnings review. I know a lot of people like to look for different ways to make a little bit extra cash and one of the ways that seem very attractive is getting paid to do surveys, read e-mails, play games, stuff like that. It might seem like easy cash to do these things and really doesn’t take much effort but you got to understand something, in the world of business, there is always a catch. And I’m going to explain to you why I really can’t recommend Send Earnings. In fact, you might even ask yourself, does Send Earnings scam people?

A lot of people get excited about a quick $5 that Send Earnings will give you for just signing up. Although that may be true, please understand that companies like this are ALWAYS trying to make it hard for you to actually make any kind of decent income. There is always something getting in the way. For an example, you don’t get to cash out that $5 right way. I’ll explain some more stuff to you. One of the claims of this company is that they are going to pay you to open up and read emails. Sounds easy right? Expect to get paid a whopping 2 cents per email. The reason is because these are paid advertisements and they know if enough people are opening up and reading them, some will actually buy whatever is being promoted in the email.

Another thing that Send Earnings promotes that sounds promising is getting paid to do surveys. Again, this is a very time consuming task in itself. First more often than not are you going to have to qualify just to take the survey and many times be disqualified. And then after like 1 hour of work, you will make 50 cents only. Oh yeah don’t forget, you are not guaranteed to get surveys to do each day. That’s another thing. You might get a few here and there, but nothing consistent enough and short enough to really get a return on your time and effort.

This is a good question however I can’t say that Send Earnings is a complete scam, but it is pretty darn close considering how it is set up for the website to win and the member to lose. I really can’t recommend this company or even method of Internet income because it’s just a waste of time and effort and you won’t get very far. You might squeeze in a couple bucks per MONTH. But honestly there are much better ways to earn income than this.