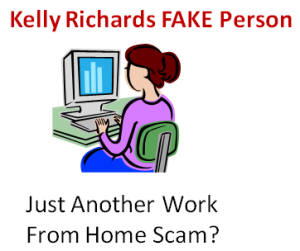 Ah yes, the infamous Kelly Richards scam work from home thing. This one is a doozy I tell you. If you’ve been suckered I feel for you, my friend. I do. It’s hard to discern what is a legit income opportunity and what isn’t, especially if you’re brand new to the make money from home industry. Allow me to explain exactly what is going on here and how this fictitious character is being used in not just one site, but a bunch of duplicate fake newspaper websites out there that are promoting in income opportunity for the average Joe. The bad news is that there is a plethora of these duplicate websites out there all spamming different e-mail accounts and drawing a lot of interest from a lot of people around the world were looking to make an honest living on the Internet. There is an army of these fake websites out there that keep using the name Kelly Richards as a featured story of success that isn’t real at all.

These websites often claim Kelly Richards is making a killing on the Internet, making $330+ per day doing simple link posting stuff. They advertise this way to get people all riled up and excited and interested to find out more. They pitch you on the idea that it’s easy and anyone can do it. Do what exactly? Work for “Google” or “post links”. It’s pure b.s. Just pure. Then they will sell you some “home income kit” that usually costs about $150 upfront. But that’s not all. They have a dirty little trick rolled up their sleeve. Without you really even noticing, they will often bill your credit card $30 per month thereafter. This is the devastating news about it all: a lot of people say they can’t even get their money back or requested refund because it’s almost impossible to get a hold of support.

The Kelly Richards scam is out there you need to be aware. Too many people are getting scammed by these fake online newspaper sales pitches and you definitely don’t want to fall for it. It’s going to be a nightmare and a headache and almost impossible for you to get your money back. Thing goodness that the FTC is cracking down on these websites more and more. And it’s funny because they’ve even gotten as clever as to installing an IP address tracking script that tailors the featured success story to your city. It’s crazy. I guess this is to build some kind of trust or relate to the visitor. All I can say is that you need to get involved with a legitimate program if you want any shot at making money on the Internet. Just avoid the Kelly Richards scam at all cost.