Posted by Vince in Not Recommended | 22 comments 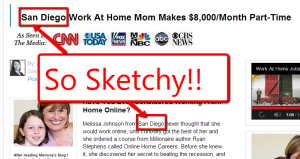 Don’t be deceived by the Kim Swartz scam. I know you might have seen her “work from home” program or system or what have you. As a full time Internet marketer, I can most-of-the-time spot out a scheme within just seconds of looking at the sales page, but decided to give this one a 2nd look…or chance. And I was still disappointed. There are definitely many indicators that it’s all a setup aimed at fooling the naive and vulnerable. I actually do see this alot and many times, the owners of these schemes hide or bail out after they’ve made their money.

Not only that, but they even have IP tracking scripts installed so they know exactly where you are from! So they tailor the site to make it seem like the opportunity is in your area.

Is She Even A Real Person?

“Kim Swartz” is nothing more than a made-up character who is promoted on these fake news directory websites. You will see an “online news” website promoting some kind of data entry or work at home shenanigan backed up by fabricated testimonials. I’ve figured it out, folks. It’s to have you trust the site as they riddle it with famous media logos such as MSNBC, CNN, and even ABC. You see these things and immediately you think the site and everything that are spilling, is true, when the fact of the matter is, it’s just a big fat hairy scam. 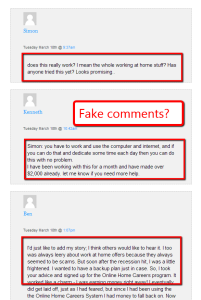 Lots of fake stuff on the site. One of the things that really caught my eye was the fake comments. It just looks so unnatural and I could’ve sworn I have seen them on other similar scam type websites. This is because websites know people like to check the comment section for honest feedback from people who have “tried” it before and want to see what they have to say.

So, they can fabricate the comment section to make it look like real different users are leaving feedback. Not even the most legit of work from home programs have that many “positive” comments. Very interesting…

So what exactly is the Kim Swartz scam promoting?

You will often see her name attached to “work at home” programs that are nothing more than big sales funnels that sucker desperate people who are looking to earn profits from home easily.

These “packages” are just simple courses on affiliate marketing. They like to sometimes refer to this as “link-posting” so average people can get an idea of how things work, somewhat. Trust me. Making money online isn’t just about simple “data entry” or posting links. The actual product as far as info itself isn’t that bad most of the time. It’s the promotion that, in my opinion, is unethical and the character “Kim” has fooled lots of people into buying an overpriced package riddled with upsells.

This means you may expect to receive additional phone calls about upgrading and spending thousands of dollars for coaching. Not to mention it’s usually really hard to get a refund.

Leave a Reply to Sharon May Cancel reply